For over 10 years now, Berlin has had another great attraction. It is a short ascent (about 15 min) with one of the biggest balloons in the world at 150 meters. The balloon ride takes place in Berlin Mitte (ccity centre). You have a great view and from the top you can see many sights like the Brandenburg Gate.

The Berlin balloon is called Weltballon (World Balloon), because on the balloon is a big advertisement of the newspaper “Die Welt”. Many times every day, such a balloon flight takes place in Berlin-Mitte at a height of 150 meters. The world balloon can therefore often be seen over Berlin Mitte and has become a kind of landmark of Berlin. 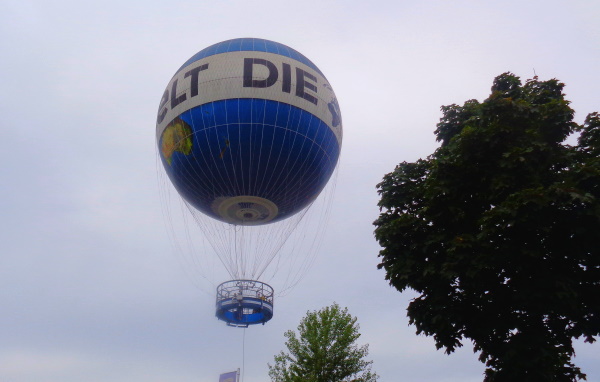 You have a very good view in all directions from the top, similar to the famous Berlin television tower at Alexanderplatz. You can see the whole city centre of Berlin including the Brandenburg Gate and the Reichstag and much more, in good weather even more. From the balloon Berlin you can even see some of Berlin’s surrounding area. According to some sources, the world balloon is the biggest helium balloon in the world, other sources talk about one of the biggest helium balloons on earth.

Location Balloon Berlin: The world balloon is located at Zimmerstraße 95 in Berlin-Mitte. The nearest subway is Kochstraße / Checkpoint Charlie, about 150 meters away. Next door is the Trabi-Safari, city tours with the GDR car Trabant through Berlin.