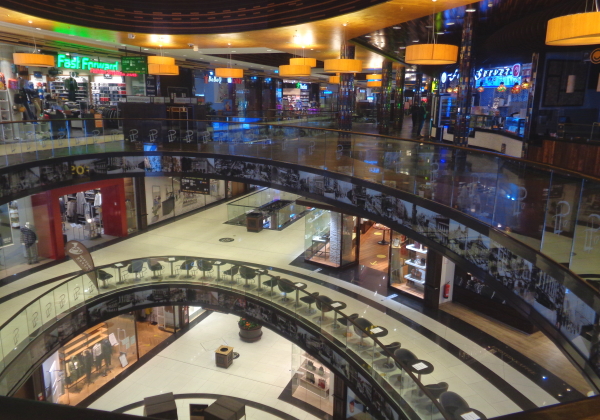 The shopping centre is on Leipziger Platz, just a few metres from the even more famous Potsdamer Platz. Even before the First World War, there was a very famous department stores’ here, the Wertheim. This was destroyed by bombs during the Second World War. The area was close to the Wall in the territory of the GDR. The GDR demolished the ruins of the department stores’. Between 2011 and 2014, long after the fall of the Wall, the new Mall of Berlin was built for about 800 million euros. It has over 250 shops and dozens of restaurants.

The shopping centre is also called “LP12” or “LP12 Mall of Berlin”. LP12 stands for Leipziger Platz 12. The Mall of Berlin consists of a west wing and an east wing. This is a reminder of the former division of Berlin and Germany into East and West. In between is a roofed building open on the sides that is well worth seeing. From there you have a view of the Bundesrat building (2nd german parliamentary chamber). 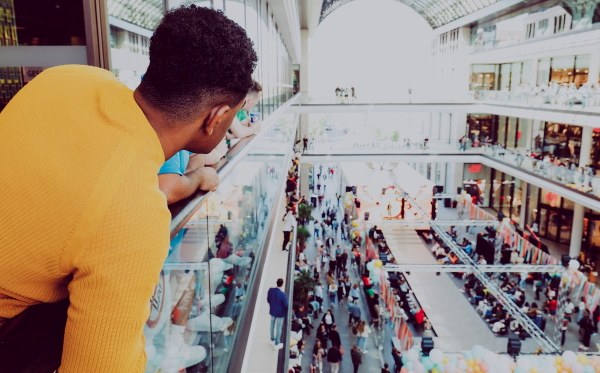 In addition to the shopping centre, offices, flats and a hotel were also built on the site. Most of the 270 shops offer fashion (clothes, shoes, etc.). However, there are also drugstores and many shops offering gifts, jewellery, furnishings and the like, shops for sporting goods and much more.

The big shops include, among others, from the fashion sector: C&A, H &M, Peek und Cloppenburg, Desigual, Zara, Wormland, Salamander, Reno, etc. Sportscheck is the big shop for sports.

The gastronomy includes well-known chains such as McDonald’s, KFC and Pizza Hut. In addition, there are many international restaurants and snack bars in the large food court in the Mall of Berlin (e.g. several Asian, Turkish, Italian, Indian, burgers, fries, etc.). 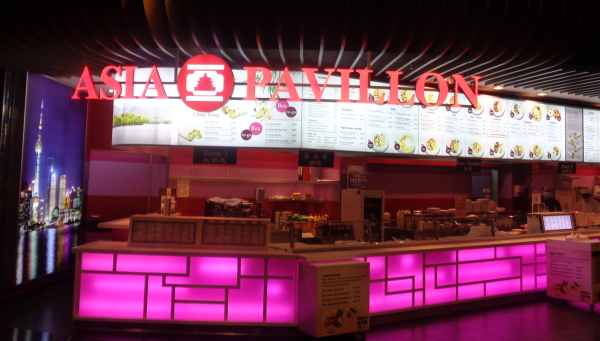 The snack bar with typical Berlin currywurst is great. Next to it are a few cafés and bakeries.

In the basement there are supermarkets and other groceries (e.g. Edeka and Aldi). Upstairs is a large Saturn (electronics). Shoe shops in the Mall of Berlin shopping centre include Foot Locker and Deichmann. The hotel in the building belongs to the Motel One chain. There are also hairdressers, a nail salon, a pharmacy, a fitness studio, a branch of Sparkasse and Postbank, an optician and a travel agency. Thalia is the bookstore in the LP12 Mall of Berlin. We also saw several mobile phone shops and toy shops. Kids love the slide that goes down two floors.

Nearby: Opposite the Mall of Berlin shopping centre is the interesting Berlin Spy Museum. The Panormapunkt Berlin, a viewing platform at Potsdamer Platz, is also a few minutes’ walk away. The same applies to the Berlin Communications Museum.

Getting to Mall of Berlin: There are around 1,000 parking spaces at the Mall of Berlin. However, most visitors come by public transport. The Potsdamer Platz underground and S-Bahn station is directly accessible from the shopping centre. Several local trains also stop at Potsdamer Platz.