TimeRide is a newer attraction in Berlin not far from Checkpoint Charlie, which we liked very much. You travel back to the divided Berlin of the 1980s by means of Virtual Reality (VR). The whole thing is technically very well done and extremely realistic.

We recommend to buy your tickets for Timeride Berlin on the internet before. On the one hand, this is usually a bit cheaper (about 12.50 Euros). On the other hand, if you arrive without a ticket, there are often long queues and waiting times on site.

>>>  On this link you will find the tickets for Timeride Berlin (time travel through the divided Berlin of the 1980s). 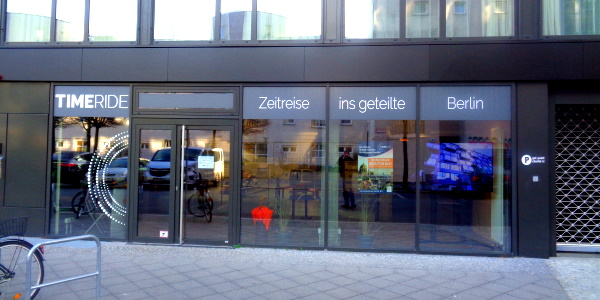 What do you see when you travel through time in Berlin?

The event takes about 45 minutes. First you will see a normal film about divided Berlin with the Wall more than 30 years ago. Then follows another film in another room where 3 people are introduced who lived in Berlin in the 80s. A woman and a man from East Berlin and a man from Kreuzberg (West Berlin). As a visitor you pick out one of these 3 persons, who then accompanies you through the actual highlight of Time Ride, the VR time travel.

You get into a bus in another room. On each seat in the bus there are huge VR glasses that you put on. When all guests of Time-Ride Berlin have put on the glasses properly, the virtual reality show starts. You can look extremely realistically in all directions. You take a bus across the border crossing Friedrichstraße from west to east aroung the year 1985. After the border control you go for a few minutes through the city centre of East Berlin of the 1980s. You can see the showpiece street of the GDR, Leipziger Straße, Gendarmenmarkt, the Wall and as a highlight the Palace of the Republic. The Palast der Republik was the central government building of the GDR with the Volkskammer (parliament) and much more. In the vernacular the building at today’s Schloßplatz in Berlin Mitte was called “Erichs Lampenladen”, in allusion to Erich Honecker.

>>>  On this link you will find the tickets for Timeride Berlin

The virtual reality at Timeride Berlin is very realistic, with broken GDR streets, Trabis (east German cars) on the streets and so on. Especially interesting are the many small details. From our point of view Timeride Berlin is extremely well done and one of the most interesting sights for tourists in Berlin.

The VR Time Ride Berlin is located at Zimmerstraße 91, directly in the center of Berlin. The former border crossing Checkpoint Charlie is about 150 meters away. Even closer are Berlin Trabant-Safari and the World Balloon (popular balloon ride in Berlin Mitte with great views). The nearest subway station is Kochstraße (Checkpoint Charlie), just under 5 minutes walk from the time travel Berlin.

The time travel through Berlin is open daily from 10 am to 8 pm. Several times per hour a new time ride show starts. DIe VR-Zeitreise can also easily be visited by people with glasses or contact lenses.

>>>  On this link you will find the tickets for Timeride Berlin 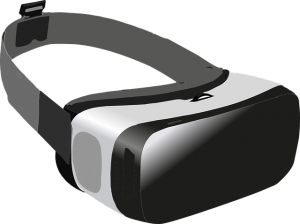