The Neues Museum is one of the 5 largest museums on the Museum Island in Berlin, the largest complex for museums in the world. Contrary to what the name Neues Museum suggests, the Neues Museum Berlin exhibits very old objects. The focus is on prehistory and early history as well as Egypt and the collection of ancient papyrus. The most famous exhibit in the Neues Museum is undoubtedly the world-famous Nefertiti. The architecture of the large museum is also very interesting. If you only want to visit the Neues Museum Berlin, you pay 12 Euro entrance fee. However, most tourists want to visit all or several museums on the Museum Island. Therefore, there is a museum pass for Berlin. With this ticket, you can visit almost all state museums in Berlin for 3 days for 29 euros. This is worthwhile, already for 2-3 museums on the Museum Island, you pay more admission together. There are also various discounts. The museum pass can be bought on the internet on this website. There you will also find more information about the 3-day ticket.

The Neues Museum is open almost every day of the year from 10 a.m. to 6 p.m., and on Thursdays even until 8 p.m.. Only a few days a year, like Christmas Eve, the exhibition is closed.

If you want to visit several museums on the museum island,you should nevertheless not come on Monday, as then most museums have a rest day.

Information about the Neues Museum Berlin

The museum building is the most important work of the famous architect Friedrich August Stüler, who built the building between 1843 and 1855. The building was destroyed and closed in World War II. It was not until after the fall of communism that the building was rebuilt by star architect David Chipperfield, and opened in 2003. The combination of the old elements of Stüler with the modern things of David Chipperfield is particularly interesting. 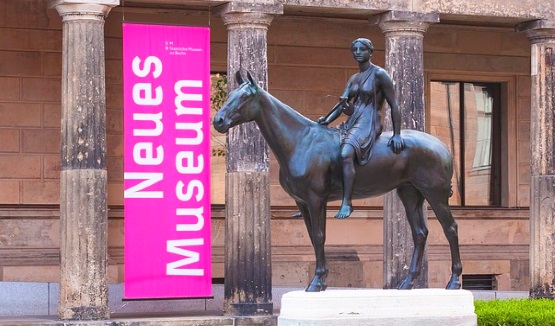 For most visitors, the highlight of Neues Museum Berlin is the Egyptian Collection. One exhibit is particularly interesting. It is the bust of Nefertiti. A bust is the representation of a head, mostly on a pedestal. Nefertiti was queen of Egypt, the head was made in 14th century BC. In 1912 it was found during excavations in Egypt and brought to Berlin. There are few well-preserved finds in the world that are so old. The Nefertiti in the Neues Museum Berlin is one of the most valuable objects in museums worldwide, the value of the head on ancient Egypt is estimated at an incredible 400 million euros. If you go to the upper floor, you find many plaster casts of different epochs like Greeks, Romans and Middle Ages. On the 2nd floor there is, among other things, a great copper engraving cabinet. In our opinion, however, the most important exhibits in the Neues Museum are in the Egyptian collection, above all, of course, Nefertiti.