Victoria Park is the best-known city park in the Berlin-Kreuzberg district. The hill in the park, the Kreuzberg, is the highest hill in Berlin’s city centre. At the top is a well-known monument that resembles a church steeple. The hill was named Kreuzberg after the cross on the monument. Later, the whole district was called Kreuzberg, one of the most famous districts in Berlin. The large waterfall in Victoriapark is also very popular. 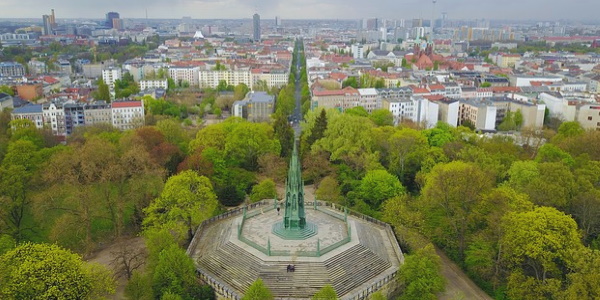 The Victoriapark is in the middle of Berlin, not far from the famous Bergmannstraße Kreuzberg. Even though Kreuzberg is the highest elevation in flat Berlin, it is still just in hill. The top of the Kreuzberg is 66 metres above sea level. The true height of the hill, however, is much smaller (perhaps 20 to 30 metres), since Berlin is not at sea level.

The monument on the hill dates from the beginning of the 20th century and is reminiscent of a Gothic church tower. It was meant to commemorate the victories over Napoleon and was built by Karl Friedrich Schinkel and inaugurated in 1821. The Victoriapark park was only built around the monument and the hill at the end of the 19th century. 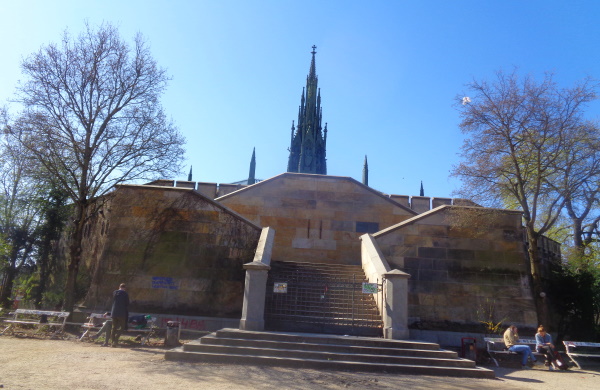 It’s a beautiful park with lots of big trees and nice squares. From the monument at the top you have a great view over parts of Berlin.

The main attraction in Victoria Park is the big waterfall. You feel like you’re in a mountain range in the middle of Berlin. Very many Kreuzbergers love their waterfall. 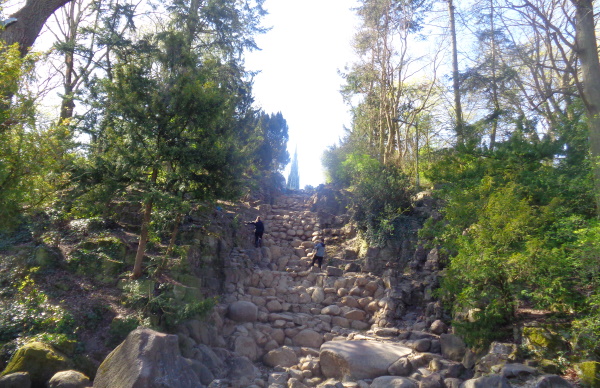 During our visit in winter (here at the beginning of April) there is no water in the Victoriaparl waterfall.

Equally popular is the southern slope of the Kreuzberg. Wine is grown here. The beer garden “Golgatha” is also very well known and usually well visited.

Overall, in our opinion, Victoria-Park Kreuzberg is one of the top 10 city parks of Berlin. Outstanding sights are the monument üben am Berg and the waterfall. A visit to the park takes perhaps an hour.

For a long time, Victoriapark was the only park in Kreuzberg. Today there are several city parks in the district. Another city park nearby is the new Park am Gleisdreieck, only about a 10-minute walk away.

The name Victoriapark comes from the wife of Emperor Frederick III, who was the daughter of the famous Queen Victoria of England.